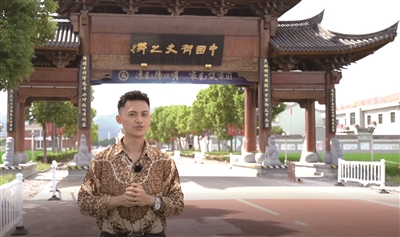 ¡¡¡¡Handi poses before the archway of Maoxin Village. (Photo by Cai Ke)

¡¡¡¡On a sunny day in late August, Suhandi Wiratama (commonly called Handi, and Wei Quanhan as his Chinese name) from Indonesia was invited by Ningbo Evening News for an immersive cultural trip to Maoxin Village, Haishu District of Ningbo to enjoy the last days of this summer. Handi graduated from the local Ningbo University and is now engaged in e-commerce and translation in this coastal city of Eastern Zhejiang. At the urban pastoral tourist complex of Maoxin Village, he visited the Imperial Censor Cultural Exhibition Hall and the Ningbo Family Tradition Museum. During his visit he learned about the imperial censor culture and the architectural styles dating back to the Ming dynasty (1368-1644). As part of the initiative to advance common prosperity, rural tourism was integrated with local time-honored culture, and visitors can also experience the combination of a simulated space station and colorful paddy fields.

¡¡¡¡After nearly 8 years’ living in Ningbo, Handi has taken intense interest in local villages, ranging from their customs/cuisine and time-honored culture to unique architectural styles. For Handi, this visit to Maoxin Village is among his regular excursions; the distant colorful paddy fields and the huge simulated space station (aka. China’s Imperial Censor Cultural Village) in Maoxin Village caught his attention. According to Yu Zhouling (staff of the Museum and member of the village’s party committee), this urban pastoral complex combines pollution-free and organic rice fields with a crayfish breeding base. In the middle of the paddy rice fields, Chinese characters of "futuristic village, common prosperity" were demonstrated through the rice with brown, yellow, dark red, and other different colors.

¡¡¡¡Stepping upward to the simulated space station set up in 2019, Handi and Yu entered the rocket launcher. The simulated station was developed in collaboration with the China Aviation Museum to provide aeronautical knowledge to people of all ages, particularly teenagers. In the simulated launch zone, Handi gained hands-on experience from rocket launching to returning, which in general requires five people to jointly complete. By following the on-screen instructions, he pressed buttons and handled the joystick to operate the rocket. The immersive experience left him with a deep impression that was enhanced by the vivid screen display.

¡¡¡¡In the company of Yu, Handi further explored other simulated training and living areas of the station, including the equipment for keeping astronauts’ fitness and special gears for sleeping and eating in a weightless space environment. To the amazement of Handi, a training zone was also constructed to simulate astronauts’ spacewalking outside the space station.

¡¡¡¡The Imperial Censor Cultural Exhibition Hall was Handi’s second stop on this one-day trip. It is a tri-functional zone established in 2015, where the imperial censor culture is embodied in the achievements and history of Lin’s family dating back to the Ming dynasty. The exhibition hall comprises such primary zones as exhibition, interaction, and sightseeing, showcasing the history and stories of the ancient Chinese imperial censor system, statues of Lin’s family, and related cultural exhibitions. Handi was also curious about the unique architectural style of Lin’s House. According to Yu, the wooden carvings on the beams were mostly inspired by ancient Chinese myths and legends (e.g., The Goddess Chang'e Flying to the Moon and Eight Immortals Crossing the Sea). Impressively, the wooden ceilings made of special materials are dust-free and protected from bugs. Handi further enquired about textures and the manufacturing of the floor. Its composition is, as Yu revealed, glutinous rice flour after high-temperature precipitation. Sands and limes were then added and mixed thoroughly to solidify the texture of the floor. It turned out to be as firm as a modern cement floor, embodying the wisdom of ancient Chinese people.

¡¡¡¡Handi’s last stop was the Ningbo Family Tradition Museum, where the exhibition of family precepts and traditions of Ningbo’s celebrities held great appeal for him. Among the exhibited local celebrities, Wang Yangming (1472-1529) has been widely regarded as the most important Neo-Confucian thinker, famous for his Philosophy of Mind. Family Letters of Wang Yangming has been recognized as the Ningbo version of The Three Character Classic. Other life experiences, achievements, and research of the local celebrities were also on display to promote traditional Chinese culture and encourage teenagers to learn extensively from these outstanding achievements.

¡¡¡¡Maoxin Village is known for its advancement of rural cultural tourism as well as the inheritance of Chinese traditional culture to strive for common prosperity. The trips of this kind jointly organized by Ningbo Evening News are meant to provide expats in Ningbo and individuals from all over the world a unique window into Ningbo tourism and special village cultures.