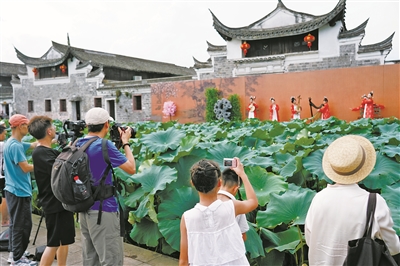 ¡¡¡¡The Song Dynasty (960-1279 A.D.) was a great and major time for the Chinese culture when many groundbreaking achievements were made and distinct aesthetics created.

¡¡¡¡As a cultural hallmark with unique Ningbo features, Song Culture deserves to shine not only in our times but also with future generations.

¡¡¡¡What is the Song Yun, or the charm of China's Song Dynasty culture? How should we define it and where can we find it? These topics have been under lively discussion among the literate community in Ningbo.

¡¡¡¡It is learned that in 1127, the imperial Zhao family retreated southward when the old capital in the north was captured by Jurchen invaders. Later, Hangzhou (then known as Lin'an) was designated the new capital city of the Southern Song.

¡¡¡¡Never had Ningbo been so close to the central authorities. Thanks to its geographical advantages, Ningbo-known as "Mingzhou" during the Southern Song-saw the culmination of its full development in politics, economy and culture.

¡¡¡¡At that time, many famous masters came to Ningbo, and their activities influenced the city for thousands of years.

¡¡¡¡For example, Wang Anshi (1021-1086), a Chinese economist, philosopher, poet, and politician during the Song Dynasty, was promoted to district magistrate (zhixian) of Yinxian (Ningbo, Zhejiang Province).

¡¡¡¡In his tenure of three years, he had done many practical things for people's livelihood as he implemented some new policies during his days in Ningbo, which became valuable experience for his later reforms.

¡¡¡¡Literati, such as Lu You, Zeng Gong, Wu Wenying, Fan Chengda, Shu Ji, attracted by the landscape of Ningbo and left famous poems.

¡¡¡¡Besides, many precious remnants of ancient Song survive. The Baoguo Temple, built during the Song, is the second oldest preserved wooden structure in Zhejiang as well as regions south of the Yangtze River.

¡¡¡¡By Dongqian Lake, a stone sculpture park showcases the most intact stone carvings from the Southern Song. Not far from the park, Hengsheng and Miaogouhou stone archways are still standing as the first of their kind in China.

¡¡¡¡Ever wonder what it is like to live as someone back in the Song Dynasty? Tens of thousands of people have done so in Ningbo.

¡¡¡¡You can also dress like Song people. Recently, Cicheng has invited citizens to dress up in Song clothing and tour around the place.

¡¡¡¡"I had so much fun there! I will definitely come back visiting again," said Ma Rui, a student from Ningbo University who participated in the event. She was amazed by the elegance of Song people in every detail of their daily life.

¡¡¡¡If you want to experience the life of ancient people in Ningbo, you must go to Tianyi Pavilion. It's very pleasant to wear the clothes of that year and recite a poem.

¡¡¡¡Recently, an event was held in Tianyi Pavilion in Ningbo, during which visitors experienced the culture of the Song Dynasty. Visitors also had the chance to experience traditional Chinese activities, such as flower arrangements and tea ceremony.

¡¡¡¡The activity was part of a series known as "Tianyi Yedu", introducing collections from the Tianyi Pavilion, one of the oldest existing libraries in Asia.

¡¡¡¡The activity focused on a stele on which 20 poems written by poets and scholars during the Song Dynasty, including Qian Gongfu, Wang Anshi and Sima Guang, were engraved.

¡¡¡¡Also, you can experience the culture of incense and fragrances in the Song style.

¡¡¡¡During the summer holiday, a calligraphy class in one of old courtyard houses by Moon Lake, a light smoke wafts within the walls inspiring student.

¡¡¡¡"The smoke sometimes grows into curves, fine spray and clouds," said a student, "It can help me find inner peace."

¡¡¡¡Why is Ningbo So Committed to Song Charm

¡¡¡¡Song Yun, or the charm of Song, is what Ningbo and Zhejiang have been promoting in the past few years.

¡¡¡¡It might seem strange in an age of the latest new gimmicks to commit to something so ancient. The Song culture, however, is far more relevant to the current daily life than you could imagine. Zhejiang and Ningbo believe that it is important to find charms in daily life as well as in all industries.

¡¡¡¡Experts believe that the Ningbo area rapidly developed from a small coastal town to a famous county in the southeast during the Song Dynasties. Therefore, Ningbo should pay attention to the study of the history and culture of the Song Dynasty.

¡¡¡¡Just like how Song managed to develop a unique philosophy and aesthetics that were fully immersed into the daily life remained to today on a teacup pattern or a piece of furniture, Zhejiang and Ningbo want to explore the possibility for a seamless integration of philosophy, cultural elements and values that could be injected into everyday life. Getting people to dress up and act in a certain way while marveling at the past incredible achievements, is definitely a good start.